The average consumption / imbalance price in Finland, Norway, and Sweden in 2021 was 59 €/MWh, compared to an average price around 40 €/MWh in 2018 and 2019. On the contrary, in 2020 the consumption imbalance price was at a historical low at 15 €/MWh. As the historically high price for the year 2021 was driven by the high prices at the end of the year, the price volatility simultaneously increased towards the end of the year. On November 26th, Imbalance price peaked at 5000 €/MWh for two hours in Finland, Sweden, and Norway (NO3, NO4). Just two days earlier the Imbalance Price was under 3€/MWh for five consecutive hours in the same MBAs.

The price rises have been relatively similar across the countries in the Nordic system. In all the countries, there has been an accelerating rise from summer towards December, with a minor decline in October. Of the Nordic countries, the price in Finland has risen most in Q4 compared to the first half of the year, more than 170 %. Denmark, which joined the Nordic imbalance settlement in February, comes close with a rise of 166 %. In Norway and Sweden, the rise has been a bit more modest, 135% and 122 % respectfully. 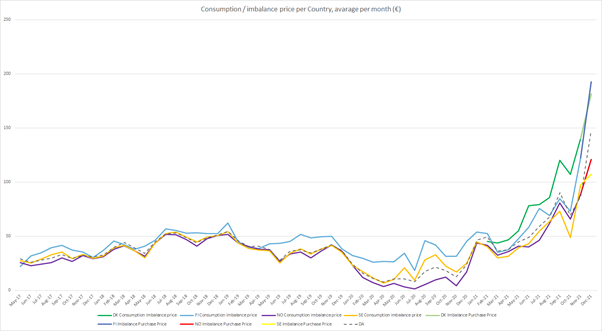